RIP AA Gill. He adored our apple juice, and called it transformative. He insisted on having it every day right until his last breath, and it relieved his dry throat and need for something tasty when the chemicals treating him made it hard to savour flavours.

Magnificent artisan apple juices. 100% natural. We don’t need to add sugar to our extraordinary juice products – we let the sunshine and the natural sweetness of the fruit speak for itself. Suitable for Vegans and Diabetics.

The ONLY Bramley product from the Original seedling now in its 208th year – Our Signature Variety.

This is the World Famous Original Bramley Seedling, now in its 204th year, and still producing fruit. But it wont last forever, which is why it’s so extraordinary that John Starkey has ‘copied’ its genes and is producing its ‘grandchildren’. See About Us to learn more about The Original Bramley’s interesting heritage and the work that The Starkeys are doing to preserve it.

The extraordinary thing about John Starkey’s Bramleys is that they can be enjoyed as fruit or as juice without any additional sugar. In this they are as unique as the Original Bramley Seedling. The reason for this is that Sir John’s trees are “granddaughters”, so closely related genetically to the Original Bramley, and like the Original, they grow on their own roots.

The apples are only harvested when they have reached their climacteric of maturity on the tree in October, thus allowing them to develop their own natural sugars to the maximum. The result is an arrestingly fresh juice with a perfect balance of Bramley acidic flavour and sweetness. The juice has a wonderful prolonged after flavour on the palate.

The Perfect Combination – A crowd pleaser.

This blend of two of England’s finest apples is the popular favourite. Depending on the season, Sir John Starkey’s juice blends 75-80% Cox with 20-25% Bramley to give a refreshing balance of sweetness and character.

From 2017, the Cox is actually Cox’s Orange Pippin – even more extraordinary!

A heritage collection – sweet and crisp.

The First of the Harvest – mellow and peachy, reminds us of newly mown grass and picnics.

The first English Apple of the season with a deliciously fresh and sweet flavour, an exciting bright red glossy skin, and about 2 millimetres of pink flesh just under the skin. As an apple, it is at its best for a very short time, but its special flavour can be captured and kept as a juice. The initial attractive pink colouring of the juice tends to fade after a few months, however, the beautifully sweet flavour never does! This is a marvellous mixer for Vodka or Gin. 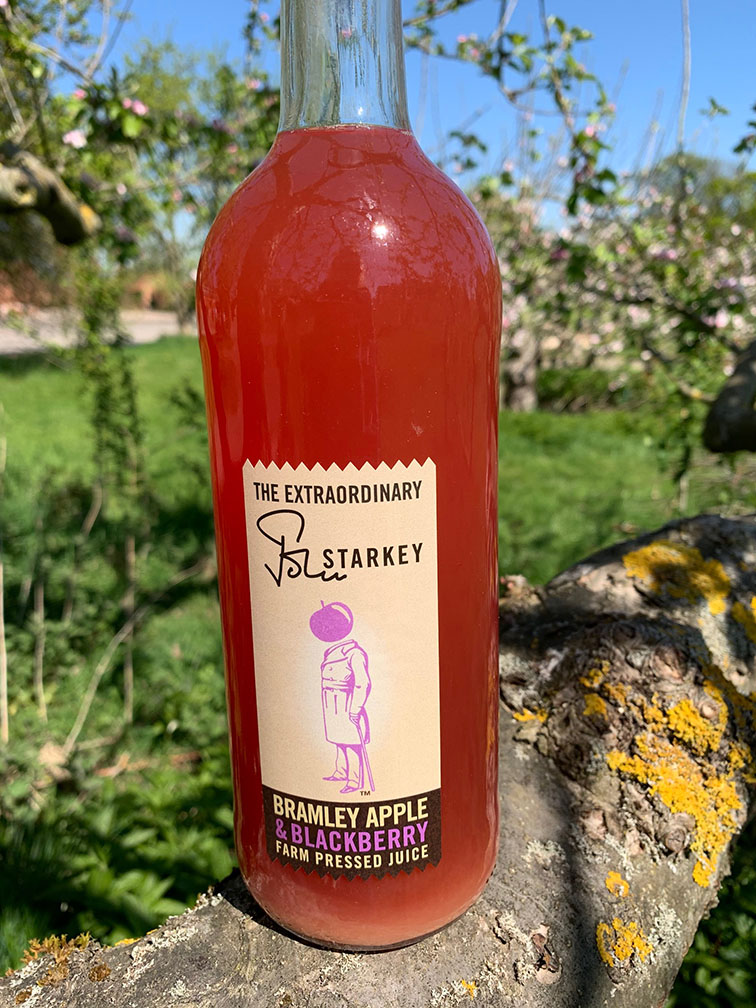 Wow what a colour! We blend 20% blackberry juice, grown on the farm, to make this exceptional juice.

It is on the tart side but mix it with sparkling white wine for a fantastic Christmas cocktail. Liquid Pie! 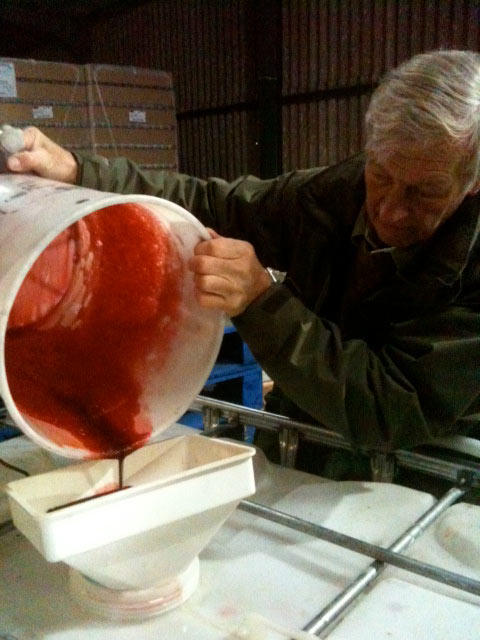 Our Apple Cider Vinegar is the perfect addition to any meal, from a dressing for a fresh salad to a flavoursome marinade to accompany a range of meats.

Our Apple Cider Vinegar is made from 100% fermented apple juice and as it is raw, unfiltered and unpasteurised it contains the ‘mother’. This may appear in the vinegar as white wispy strands or the vinegar may turn cloudy. Many consider this to contain all the good stuff and ACV has many health benefits. It makes the perfect ingredient for your daily detox!

100% British 100% Bramley Apple Compote. Our Compote is Apple Sauce with a difference – not just for pork!

100% British 100% Bramley Apple Compote. Our Compote is Apple Sauce with a difference – not just for pork! It has nothing added, is naturally sweet, vegan, suitable for diabetics and British To The Core! It works perfectly with ice cream, porridge or in desserts. It’s delicious spread on toast instead of sugary jam. You can even eat it straight out of the jar with a spoon! See our recipes page for more ideas!

Our cider mixes a blend of Original Bramley, Cox and Discovery Apples. So good you can’t ‘get your head around it.’

For those who “have everything” –
A unique Christmas present to last a lifetime and to bring #Bramlicious pleasure year after year.
Each clone has its own number and care booklet.
Shop Now

Apple trees love the snow - they hunker down befor

Christmas message- to the tune of Good King Wences

Very excited to be supplying the marvellous family

My father was prevented from planting the new flow

Goodbye and Thankyou to Park Orchard - after 40 ye

Apple trees love the snow - they hunker down befor

Christmas message- to the tune of Good King Wences

Very excited to be supplying the marvellous family

My father was prevented from planting the new flow

Goodbye and Thankyou to Park Orchard - after 40 ye

Subscribe to our YouTube channel for light hearted VLOGS in the Orchards with
Top Tips from Suzannah and team: @starkeysfruit